I am a Marie Skłodowska-Curie fellow at the Department of Computer Science of the University of Oxford. My main interests lie at the intersection of mathematical logic, duality theory and theoretical computer science. If you are interested, you can read more about my research interests or my Marie Curie project D-FINED. 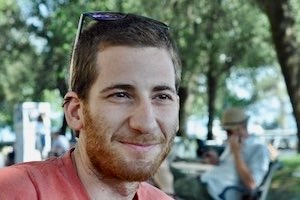 I am part of Samson Abramsky’s group, and collaborate with the Oxford and Cambridge teams on the EPSRC project “Resources and co-resources: a junction between semantics and descriptive complexity” co-led by Samson Abramsky and Anuj Dawar.

Before coming to Oxford, I was a postdoc researcher at the University of Bern, working on George Metcalfe’s project “Hidden Quantifiers”, and at the Institute of Computer Science of the Czech Academy of Sciences in Prague.

I obtained my PhD in Mathematics at Université de Paris in September 2018, under the supervision of Mai Gehrke. I spent the first two years of my PhD studies at IRIF (Paris 7), and the third one at the Laboratoire J.A. Dieudonné in Nice. In that period I held a scholarship from Sorbonne Paris Cité, and worked on Mai Gehrke’s ERC Advanced Grant DuaLL. My PhD thesis, entitled “Quantifiers and duality”, can be found on the Publications page.

Our joint paper with Marco Abbadini, entitled On the axiomatisability of the dual of compact ordered spaces, will appear in Applied Categorical Structures

New preprint available: A Cook's tour of duality in logic: from quantifiers, through Vietoris, to measures, joint with Mai Gehrke and Tomas Jakl